On Thursday, January 29, 2015, PfAL welcomed H.E. Macharia Kamau, Ambassador and Permanent Representative of Kenya to the United Nations, to speak to the PfAL@LSE group. Ambassador Macharia Kamau has served at the United Nations for over 25 years, mostly in senior management positions, and has extensive international experience. In addition, he was co-chair of the Open Working Group on Sustainable Development Goals, established in January 2013.

In a talk chaired by Robert Wade, Professor of Political Economy at The London School of Economics and Political Science, Ambassador Kamau spoke about consensus leadership. He began with the importance of having a global perspective of how the modern world works. He emphasised that increasing interdependence and connectedness meant that effective leaders must forge partnerships and build consensus to achieve goals.

The Ambassador touched on the complexities of consensus leadership at multiple levels, particularly in a large organization such as the United Nations, and the potential challenges of reaching outcomes that could be embraced by all parties. But he encouraged the students that considering the direction the world is taking, developing countries in Africa are where future changes will take place.

Ambassador Kamau then took a deeper look into the Sustainable Development Goals and their ambitious goal to “end poverty at all levels everywhere” by 2030.

“Leaders are driven by conviction; they are driven by determination. The cynics and naysayers will always be among us. The people who change the world, the people who made it possible for us to be here today, in the 1950s/60s were fighting a different battle. But they foresaw this world.”

The Q&A that followed the talk was a lively one, with students asking direct questions about consensus leadership and measurements. Even as the group made their way towards the networking reception, several students engaged the Ambassador in conversation.

“It was a great evening. The networking during the reception was especially superb. While I was still questioning some of Ambassador Macharia’s perspectives during the talk itself, the reception offered a relaxed occasion to engage deeper with him out of which I appreciated his view. He repeatedly emphasised one point which was my take home that day: ‘do not get lost in the noise, focus on the big ideas,'” said Yusuf Kiranda.

“I was very inspired by the Ambassador’s talk; the optimism he had about the Sustainable Development Goals and how they can change the world was almost infectious! I got a sense of the complexity of the UN and how actors try to achieve consensus,” said Kimathi Muriithi. “The main take away for me was that the world is changing very rapidly and that developing countries need to position themselves strategically in order to reap the benefits of this change.”

The reception was also a time for the group to strengthen the bonds that started at the PfAL@LSE launch in December. We even managed to get a group photo (missing a few who left earlier)! 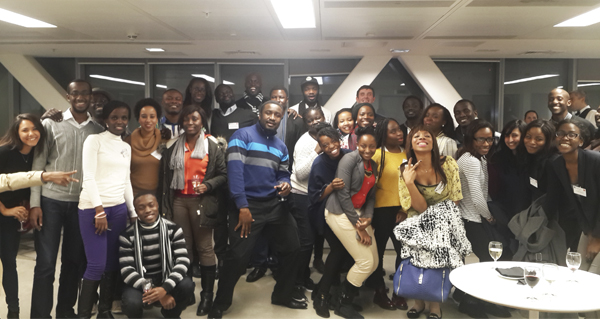