“My new path has led me to realize that the vision of a new society in Africa will need to be developed in Africa, born out of the Africa historical experience and the sense of continuity of African history. The African is not yet the master of his own fate, but neither is he completely at the mercy of fate. As you leave LSE, my wish for you is that we keep looking for Africa’s solutions. Don’t settle!”

With these words Fiona Mungai, a PfAL4 scholar from Kenya, gave a smile to the applause of the PfAL4 group and headed back to her seat. Isabelle Umugwaneza, from Rwanda, took the podium.

“Good afternoon. Distinguished guests, Mr & Mrs Lalji, Fellow Colleagues, it has been a pleasure spending the day with you all, yet again hours spent receiving much needed food for thought, and encouragement…”

Hearing exhortations from two of the graduating PfAL4 scholars were just some of the highlights from the final PfAL@LSE event on Wednesday 24th June 2015. Throughout the course of the day, PfAL4 students engaged with the PfAL Leadership Code, a document written by the first two PfAL cohorts and revised by the third cohort by which all PfAL members agree to abide.

The first session welcomed Caleb Tamfu, Managing Director of Andron Engineering Ltd and UK Chapter Head of Africa 2.0, and Samantha Sangwe, CEO of FER-AL. The two entrepreneurs spoke about their personal journeys to creating their businesses, both which aim to advance the African economy as well as to create jobs in communities. They also took the opportunity to challenge the group to take responsibility of the knowledge and tools they’ve gained at LSE and to make an impact in their home countries, and consequently the African continent.

“When you have challenges, it makes you stronger; it makes you think out of the box…Believe in yourself…and really trust your gut. Because at some point you won’t know what you’re doing, but you have your gut and that gut will tell you where to go,” Samantha said.

Next, PfAL2 alumnae Tsitsi Dangarembga and Naisola Likimani spoke to the group about living out the Leadership Code – the values and commitments in particular – in their everyday lives and daily in their jobs.

To wrap up the discussions on the Leadership Code, Firoz also shared his own story of leading a business before engaging the students in conversation about ethical leadership.

“Effective leadership is about enabling others’ success…If each of you has an impact in your own society, collectively, you’ll have a huge impact,” he said.

During the session, the students were also able to be candid about some of the struggles they’d faced in the workplace or in trying to build their own businesses. What became clear was the need for the students to become ‘agents of change’ in Africa so that companies and leaders can operate ethically and effectively.

He then handed the stage over to Fiona Mungai, the first of our student speakers. As quoted above, Fiona reflected on the year’s major lessons – academically, professionally and personally. Isabelle Umugwaneza took Fiona’s message forward by urging the group to work together in fighting for meaningful change, to break away from the labels so many place on them, and to define their and Africa’s future.

“My hope is that we challenge the categories that were supposedly drawn for us to fit into, and instead aspire to be leaders of the kind that Josephat Byaruhanga speaks of, he said:

‘In many ways leadership is like a panicle of rice. Because at the height of the season, at the height of its powers, it’s beautiful, it’s green, it nourishes the world, it reaches to the heavens. But right before the harvest, it bends over, with great gratitude and humility to touch the earth from where it came.’

This means we cannot forget those who made great sacrifices in order for us to be here, parents who toiled to support us, friends who read over our application letters, nor should we forget those who await the harvest of our collective awakening.”

After these strong, final words from Isabelle, Stuart Corbridge, LSE Provost and Deputy Director, delivered a short address to the students about the journey PfAL had taken at LSE:

“This is one of the most transformative things to happen at LSE,” he said, and appreciated the Laljis for their generosity and continued support of the programme.

To conclude the event, as well as the year, each student received a certificate of completion and a yearbook commemorating the 2014/15 PfAL year. All that was left was for a fun, celebratory group photo, drinks and some food! 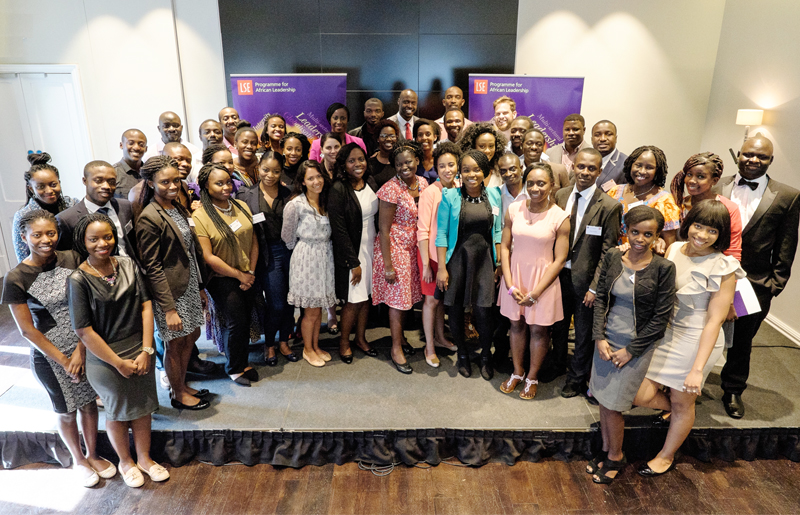